This section allows you to view all posts made by this member. Note that you can only see posts made in areas you currently have access to.

August 06, 2020, 11:33:56 am
Hey, so, small update; I've convinced myself getting rid of the ice road in favor of a soul soil path (to travel along it with soul speed III) is going to be a better idea for the nether tunnel system in the long run (and maybe even invest in speed beacons all along the tunnels in the long run?), and so, I have changed up the designs a bit. These tunnels sacrifice boat travel to optimize soul speed and elytra travel through the tunnels. 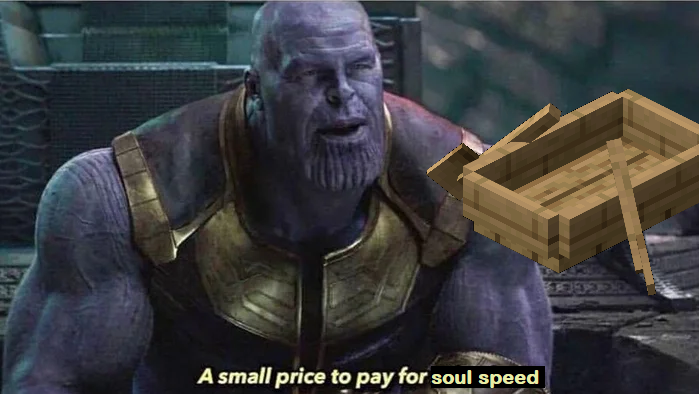 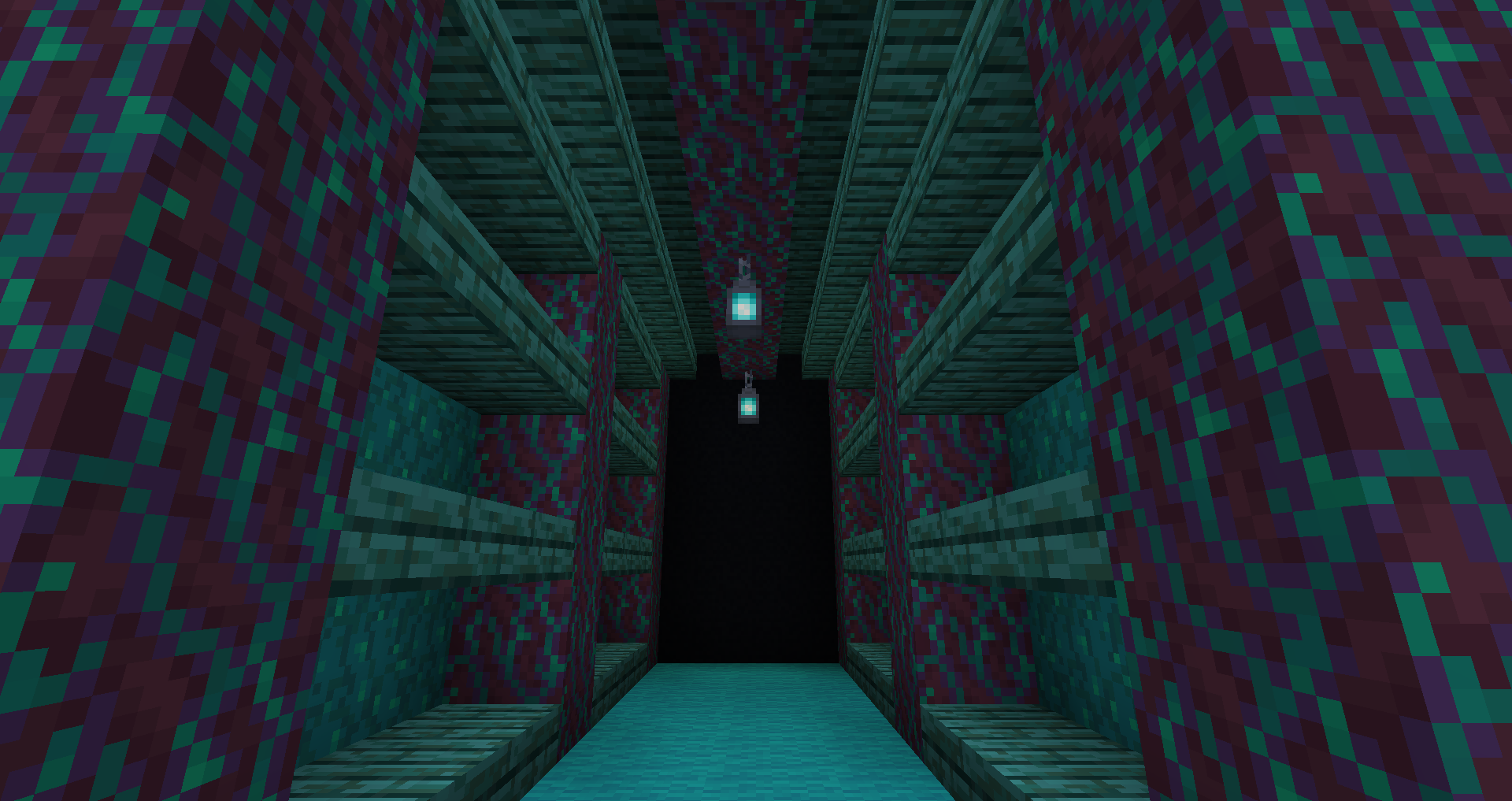 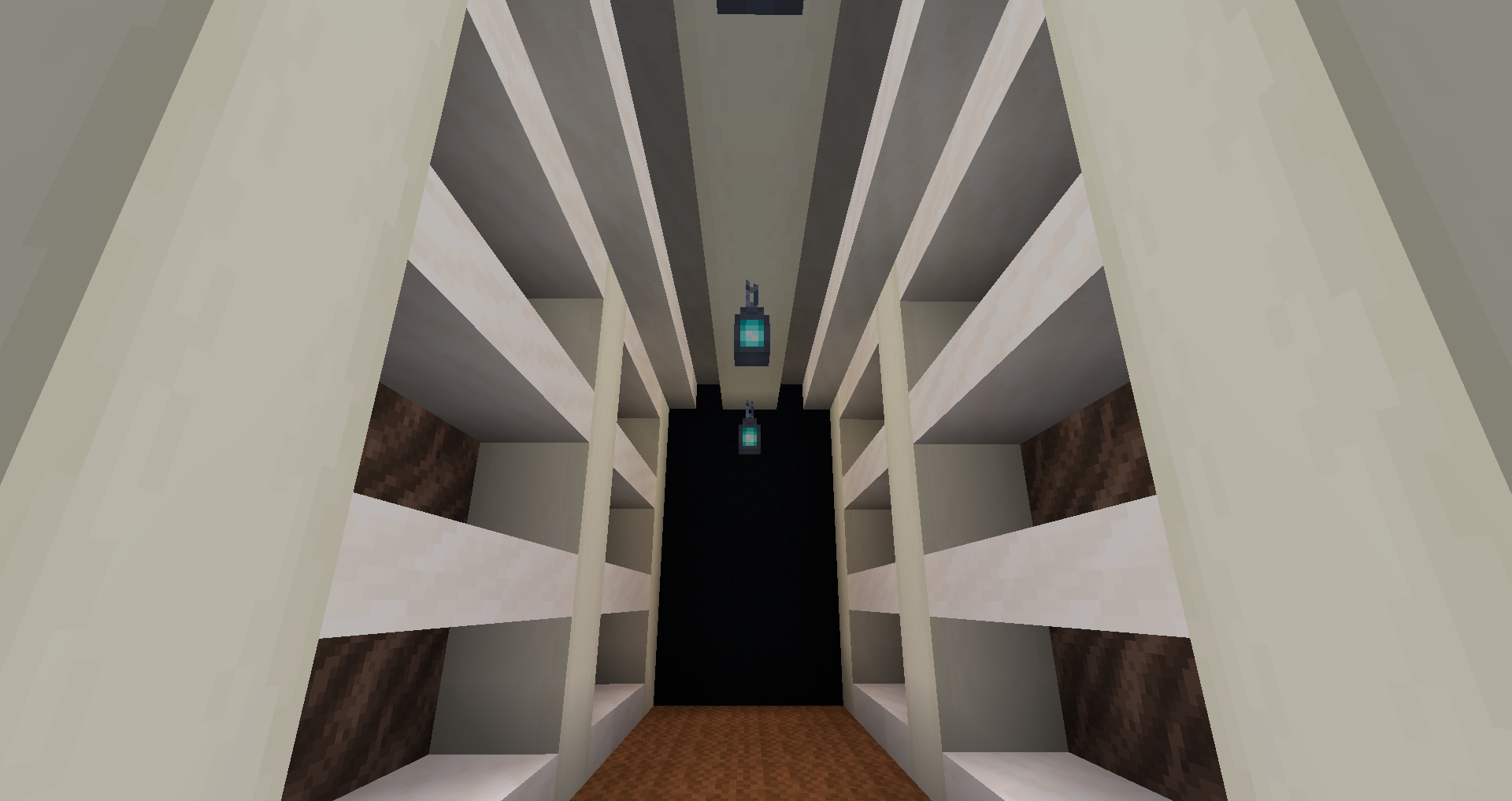 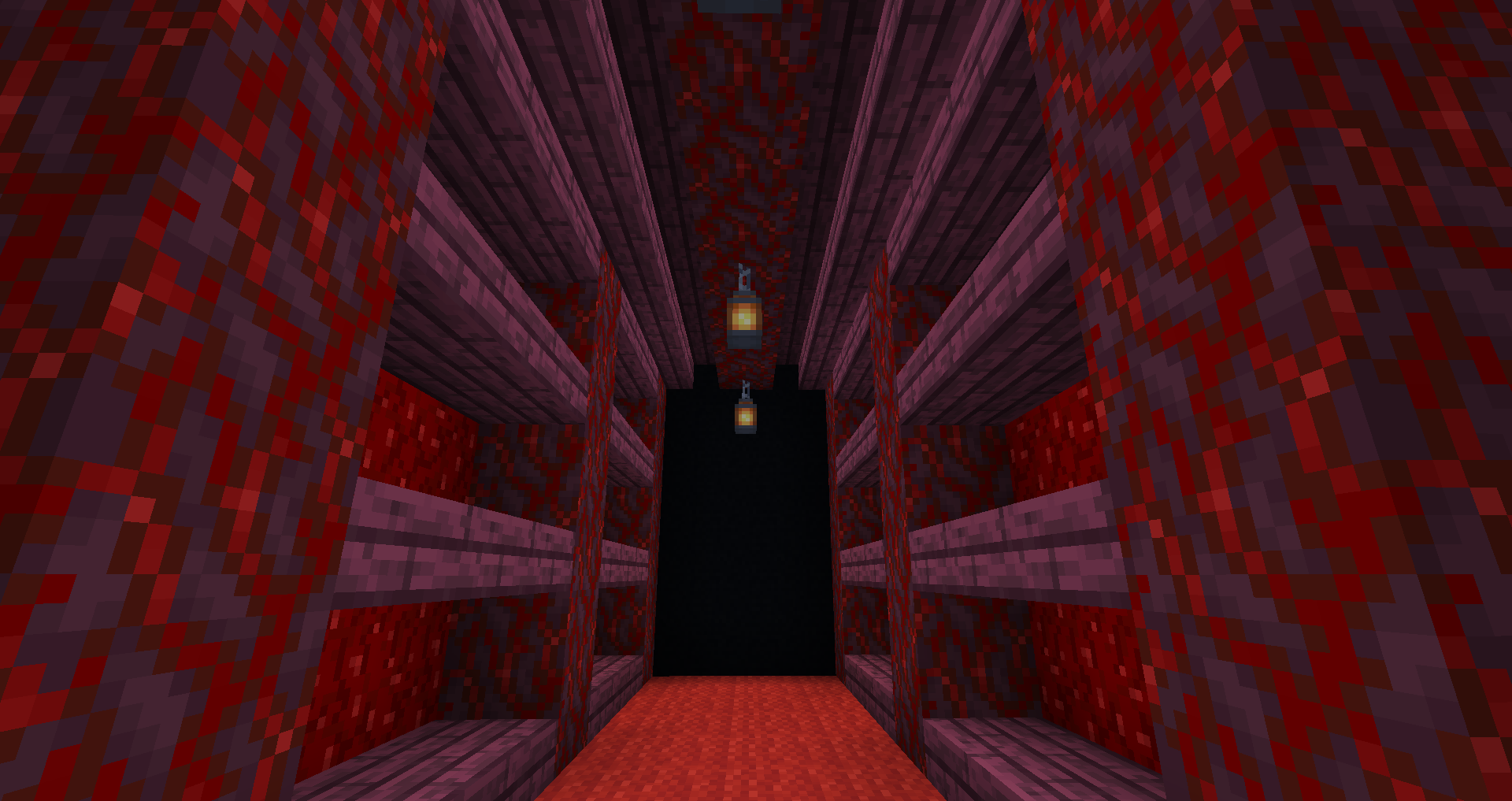 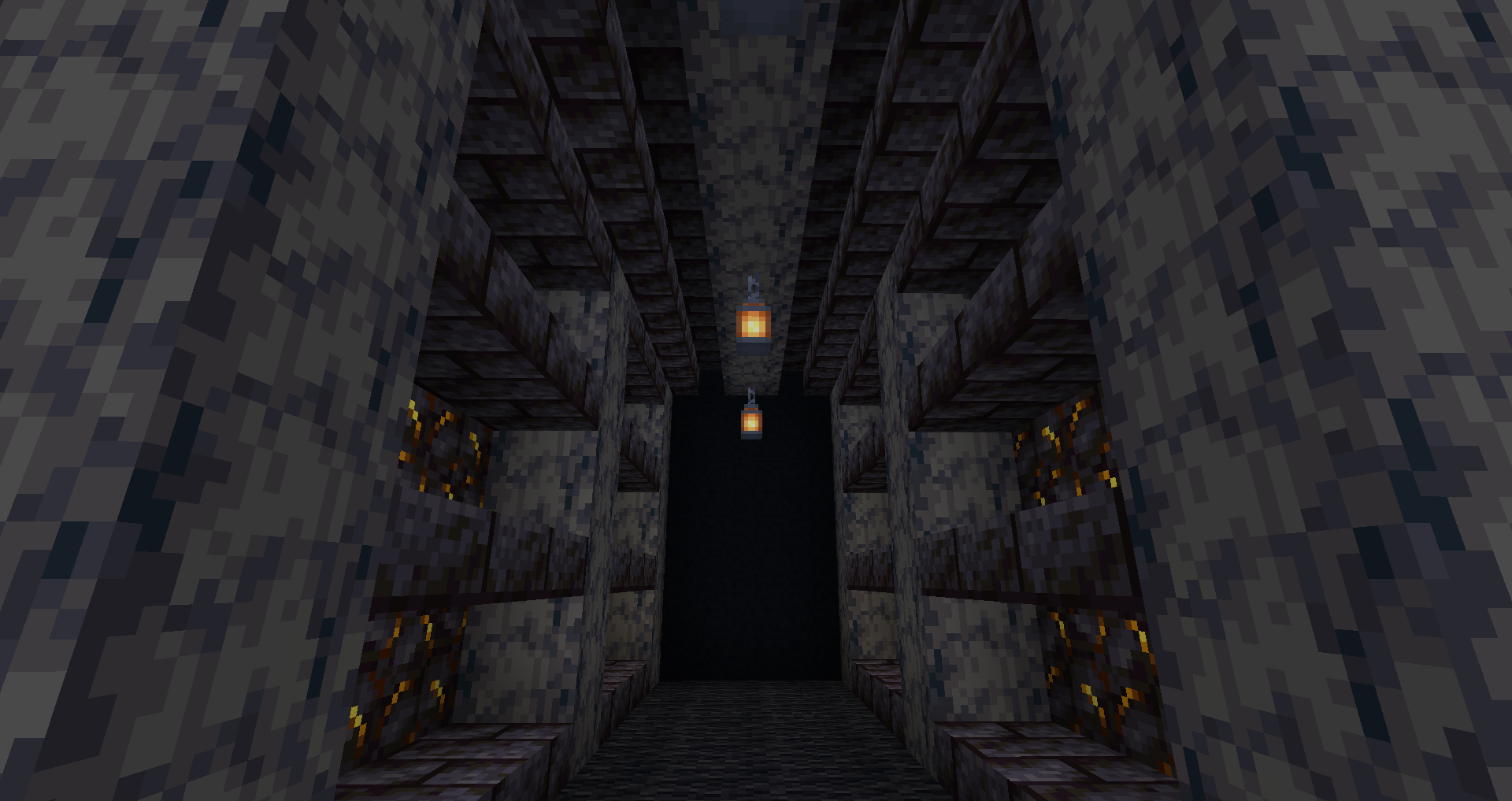 Also note that I swapped the east and west tunnel around, since there is a basalt delta immediately west of spawn, so that seemed more fitting. There's soul soil under all the carpets.

August 03, 2020, 06:04:16 am
Whitelisted, I thought I had seen someone already say they got this one in discord so I ignored it until it was asked in discord last night again, woops.
3

July 10, 2020, 06:11:40 am
As far as I know, respawning the end dragon doesn't do much damage to the island. The only issue is that one of the obsidian pillars will regenerate, straight through the tunnel from the obsidian spawn platform to the exit portal. So just make sure to open that up again after defeating the dragon

June 26, 2020, 06:51:29 am
On second thought, the delta tunnel might not be realistically achievable (even though it looks fuggin dope). I originally made that design in the snapshot the basalt delta biome and blackstone was added - gilded blackstone was in the game at that point, but there was no way of getting it in survival. My assumption was that it would either generate in the basalt deltas or even be craftable, since it was called 'gilded blackstone' and not 'blackstone gold ore'. They didn't add the bastions until the next snapshot, and I only just recently found out the only way to get gilded blackstone is from bastions. Getting 36 stacks of it might just not be realistic or even possible with the world border we have.

I have to say I personally wouldn't be opposed to making it a craftable block (the name already implies as much), not just for the sake of the nether tunnel but also so it can be used as a detail block in other builds. Maybe something like this?

June 24, 2020, 12:22:00 pm
Howdy folks, it's that time of year again; another minecraft update, another (nether) reset, and another block palette to make a nether tunnel system with! Since the theme of this update is the nether, I had the idea to make every rail be based on one of the new nether biomes, rather than a color like we usually do: 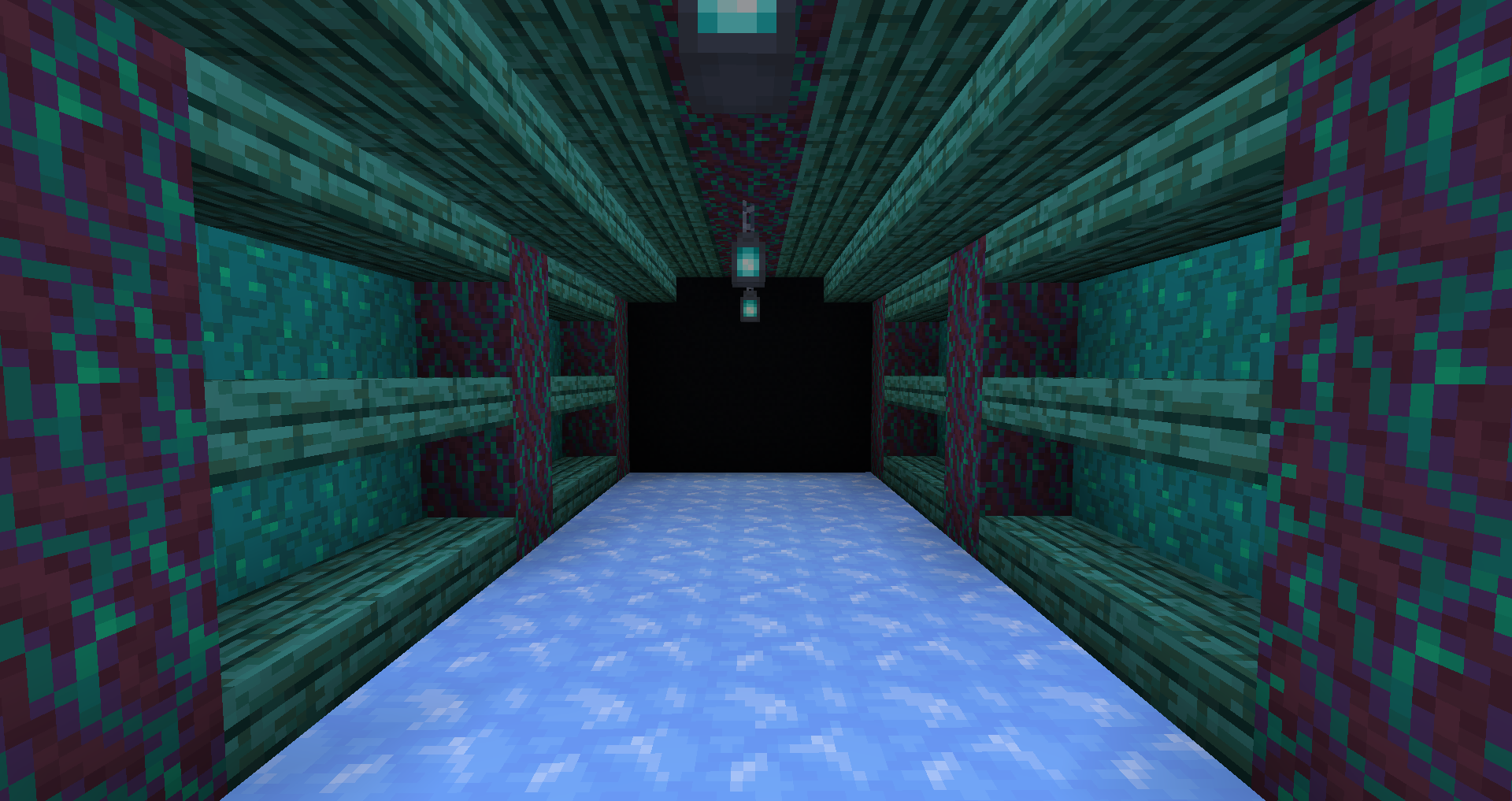 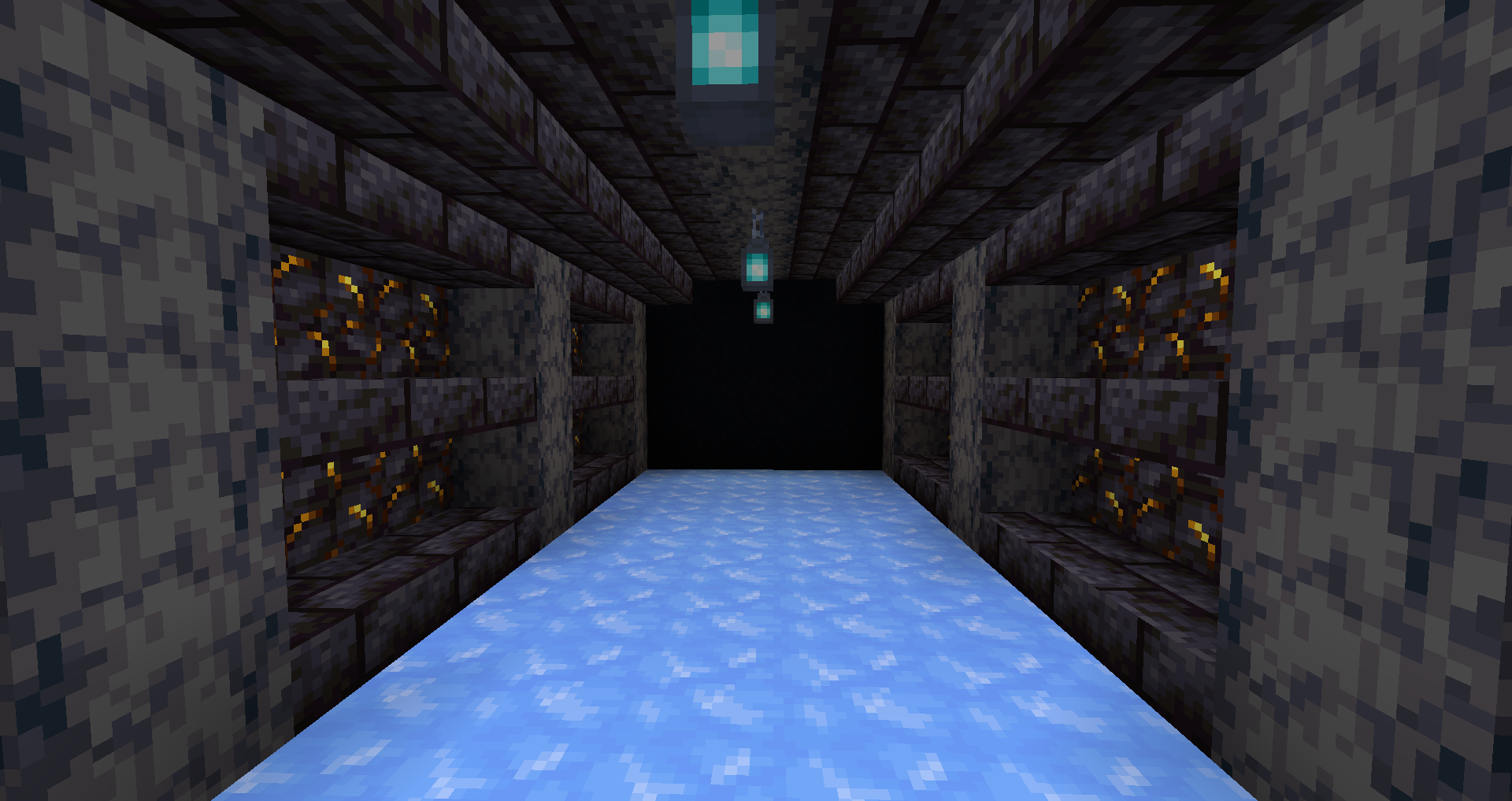 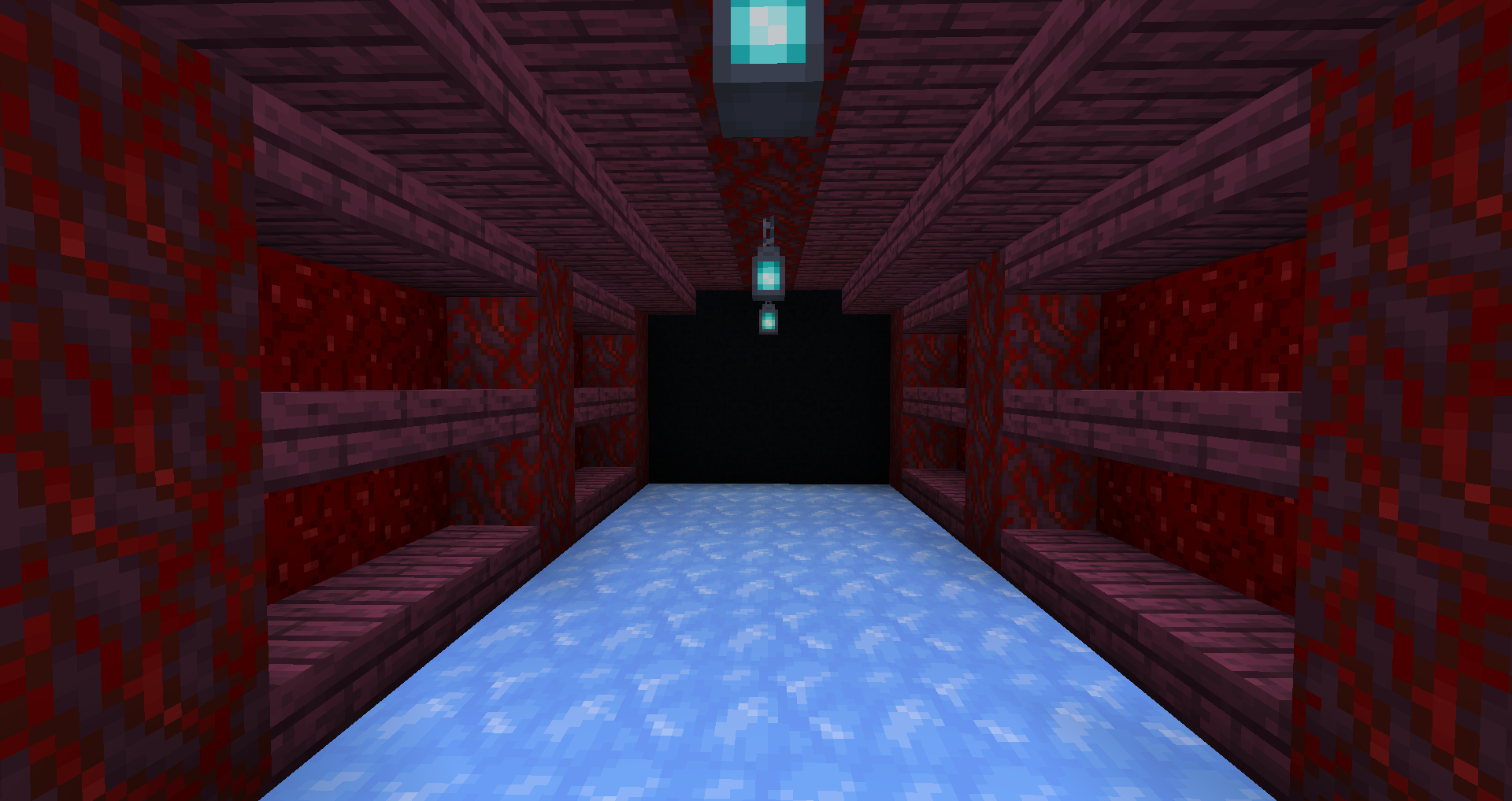 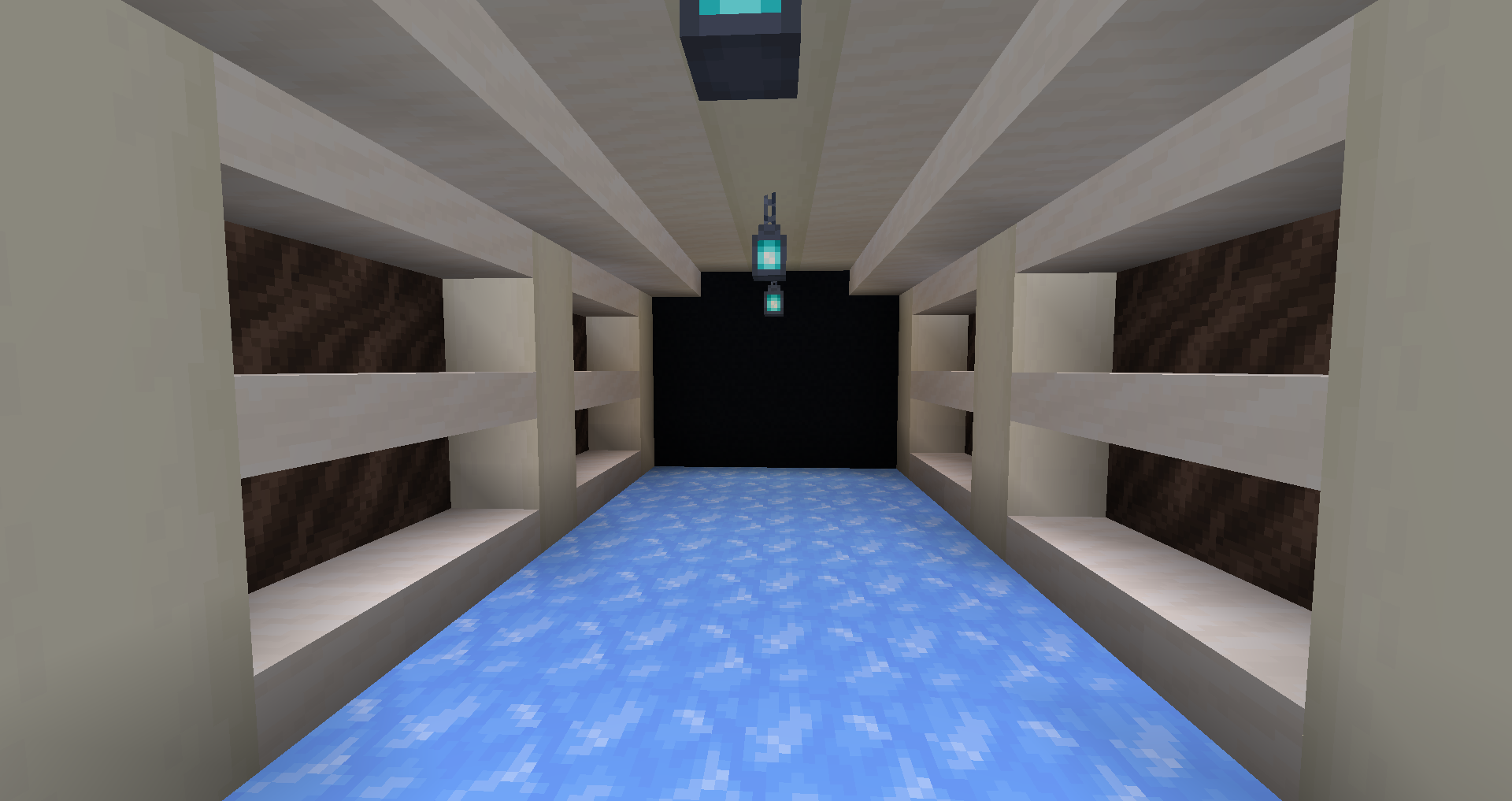 These designs are a little different from the ones I posted in the discord channel, mainly:
-I replaced the stripped stems in the Warped and Crimson tunnel with non-stripped versions. I made these designs when the first nether snapshot originally came out and I didn't like the looks of the non-stripped stems, but they have grown on me since. They add a bit of texture and color to these two tunnels.
- Previously, the Delta and Crimson tunnel had normal lanterns instead of soul lanterns. While the normal lanterns give off more light and fit the color scheme of these tunnels better, the soul lanterns makes piglins run away, behavior that takes priority over attacking players. Even if we don't spawn proof the tunnels, the soul lanterns make the piglins much less of a problem (they'll still block your boats, though).


I added a small, temporary collection of chests across from the spawn nether portal and behind the bulletin board to collect materials we can already gather right now 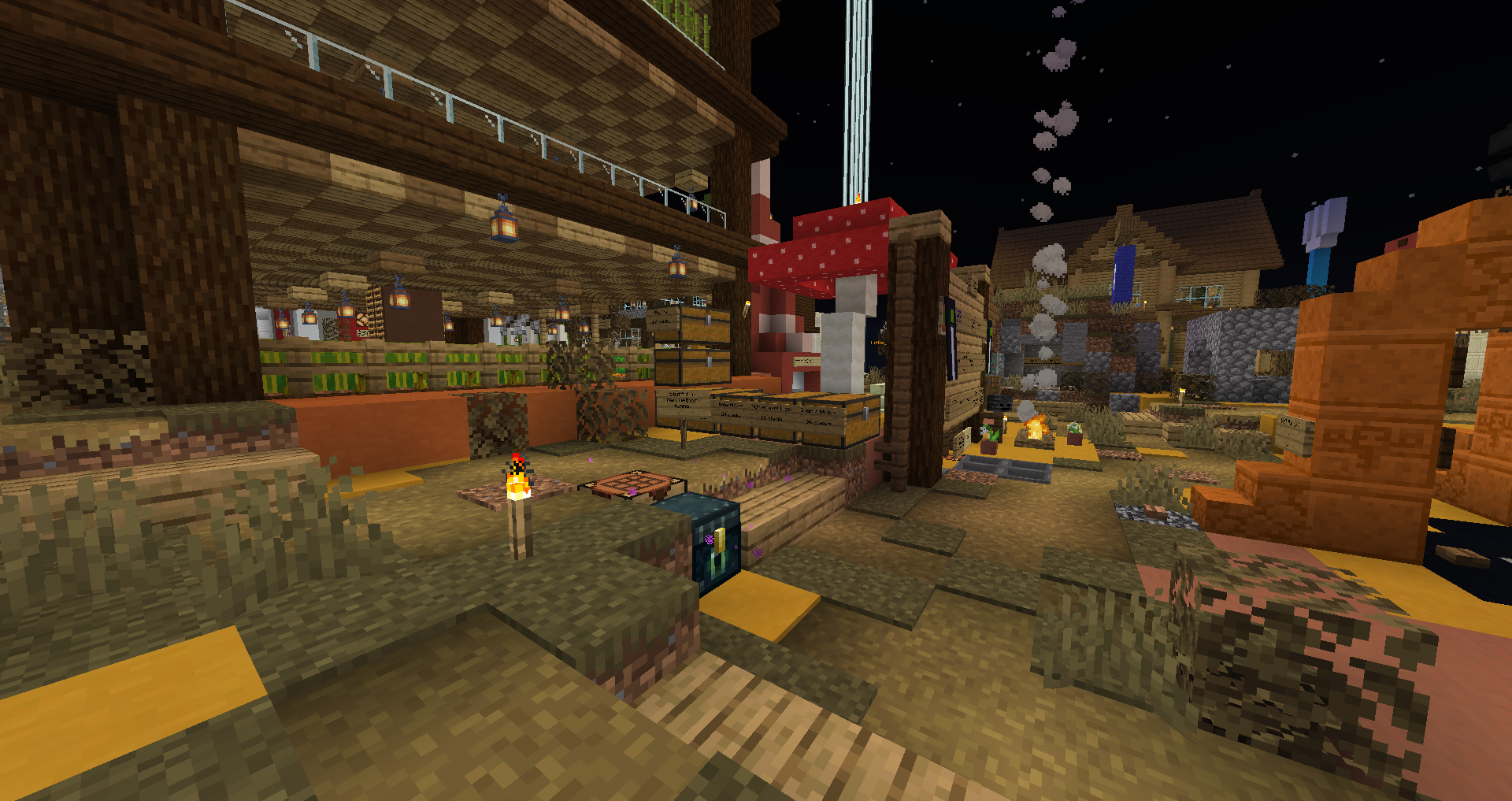 April 30, 2020, 09:19:29 am
Hey all, welcome back to this graveyard of a forum. In the discord, we've had many discussions about alternative means of getting shulker shells and we've finally landed on a semi-acceptable solution. Shulkers now always drop 2 shells, and Chester went through the end and respawned all the shulkers killed so far. Of course, next update, we're going to get another, rare, non-renewable resource that is going to be severely limited by the world border; Netherite (or specifically, ancient debris, which is the primary ingredient for Netherite). Worse, this resource is in the nether, which means it'll be limited to the 2.5k by 2.5k nether dimension. 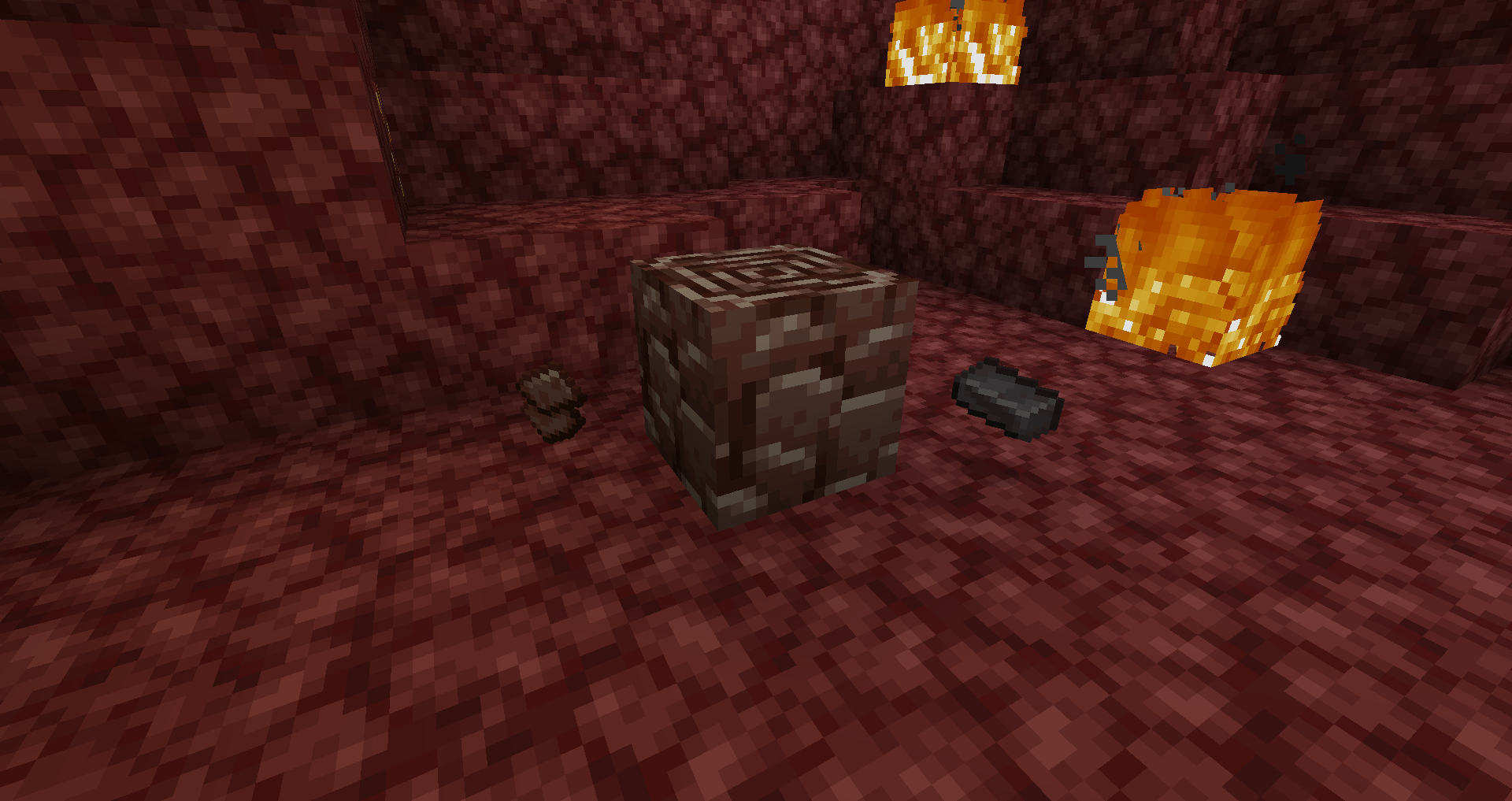 For those unfamiliar with the recent snapshots and coming nether update: Ancient Debris are a new ore-like type block found in the lower levels of the nether. It's extremely rare and never generates exposed to air, so you'll need to do a lot of digging to get it. Ancient debris can be smelted into a single piece of Netherite Scrap, and combining 4 pieces of Netherite Scrap with 4 gold ingots will give you a single Netherite Ingot - You can upgrade your diamond gear and tools with netherite ingots in the Smithing Table (only one ingot required per item), largely increasing their durability as well as increasing their mining speed and armor toughness a bit. All around it's a pretty valuable material that's basically an upgrade to diamond. If we're going to make exceptions and changes for shulker shells, we definitely should for netherite as well. There's a couple approaches we can take here:

1) Make a crafting recipe.
On paper, this seems like the easiest solution to implement and make it widely available. In practice, crafting recipes are a fucking disaster. Everyone has their own line for what is too cheap and what is too expensive and I don't think there's any crafting recipe for a material as valuable as netherite that more than 50% of the players could get behind. 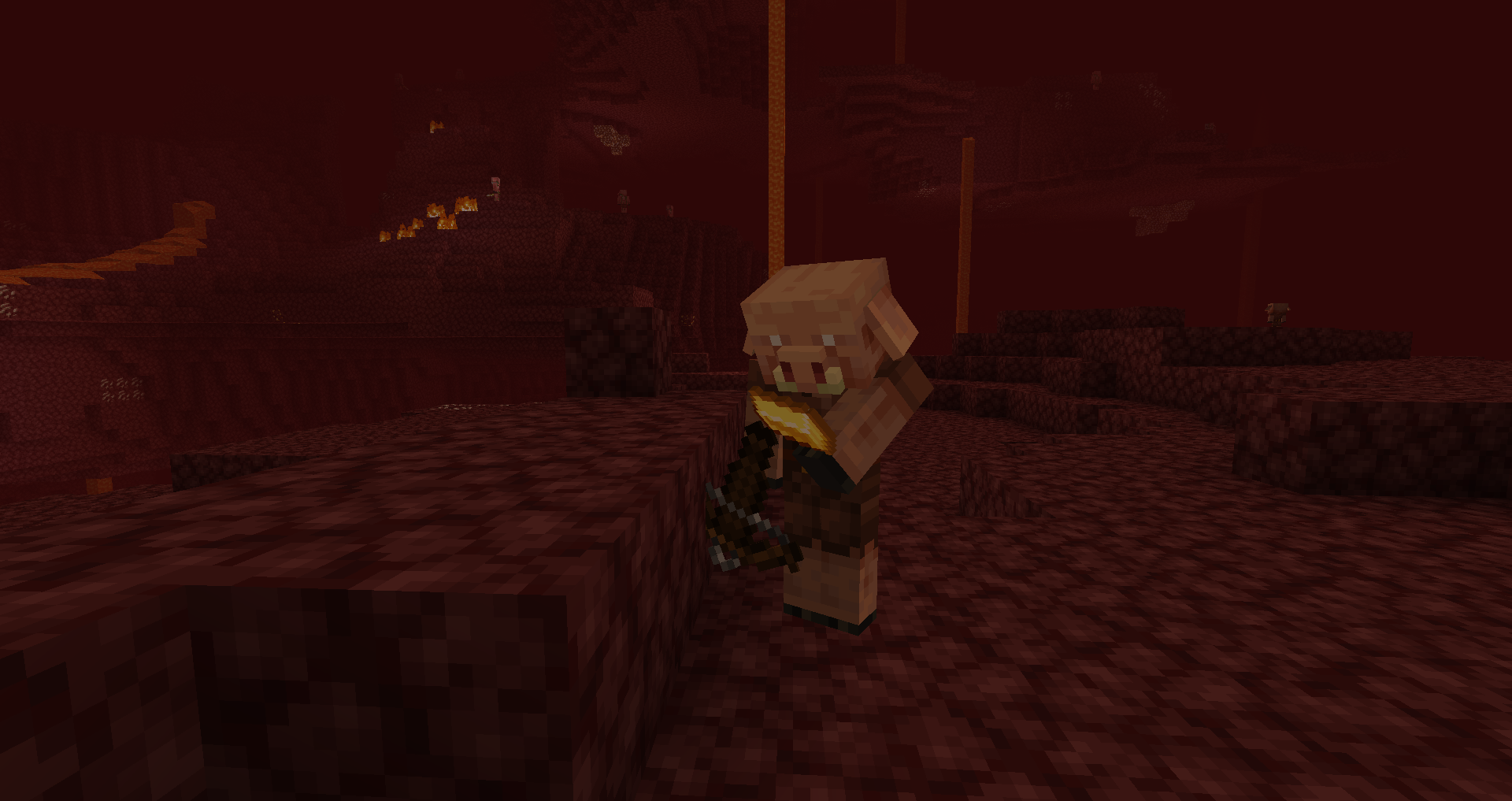 2) Make ancient debris/netherite scrap/netherite be obtainable through bartering with piglins.
For those who haven't been looking into the snapshots, piglins are a new mob that spawn in the nether - they're basically the non-zombie versions of zombie pigmen. If you throw them a gold ingot, they will pick it up, look at it for 6 seconds, then give you an item in return. This process is known as 'Bartering' and can be automated by simply having a dispenser shoot gold ingots at a trapped piglin. For more information on this mechanic as well as the drops you can normally get from it, check the wiki page.
A possible way of making netherite obtainable is by adding either netherite ingots or netherite scrap/ancient debris to the piglin trading table (with the same rarity as netherite hoes, most likely). This would make it so you'd need over 8 stacks of gold and a good amount of time depending on how many piglins you have trapped to get a netherite ingot (or 4 times as much if you were to make them trade netherite scrap/ancient debris instead). I think this would be a nice little trade off - it'd take a lot more time than just mining for it, but significantly less effort (if you have a gold farm, that is). 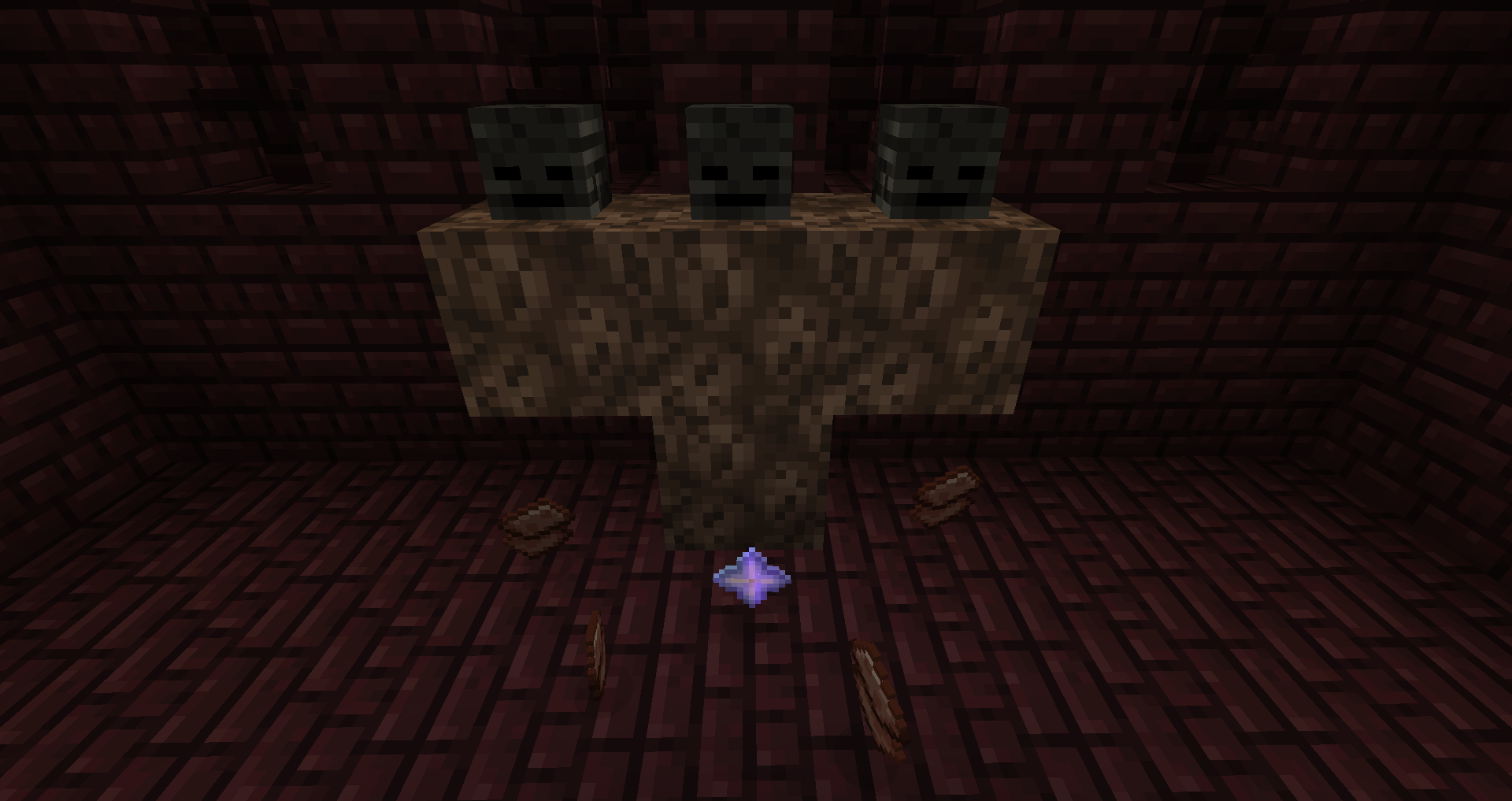 3) Make ancient debris/netherite scrap/netherite drop from the wither.
The validity of this option largely depends on if someone makes a wither skull farm again once we reset the nether. Similar to the piglin option, this would require the initial effort of making a farm, but then just takes mostly time. However, it's not fully automatable, unlike with the piglins, but might require significantly less time depending on the rates of this wither skull farm. As a trade off to taking significantly less time, I thought it might be balanced to include a little bit of randomness into the mechanic, and have the wither drop a random amount of netherite scrap - somewhere between 0 and 4, maybe? Just so you don't know exactly how many skulls you'll need to acquire the amount of netherite ingots you want.

If you made it to the end of this post, congrats! Please vote on the option you like best, or suggest your own in the comments if you have a better idea (but you don't, I'm way smarter). Thanks for reading!
9

April 10, 2020, 06:26:34 pm
Small update: People have reported that the buttons sometimes don't work, seems like it's because of certain items when held in the offhand, like tools. If you encounter any issues with world protection, try clicking with an empty hand and it should work

April 10, 2020, 03:19:17 pm
Easter is almost upon us! However, it seems something is awry. The bunnies need your help! Head over to their stand in spawn and see what is wrong to start the egg hunt (done by pressing the birch button on the ground). 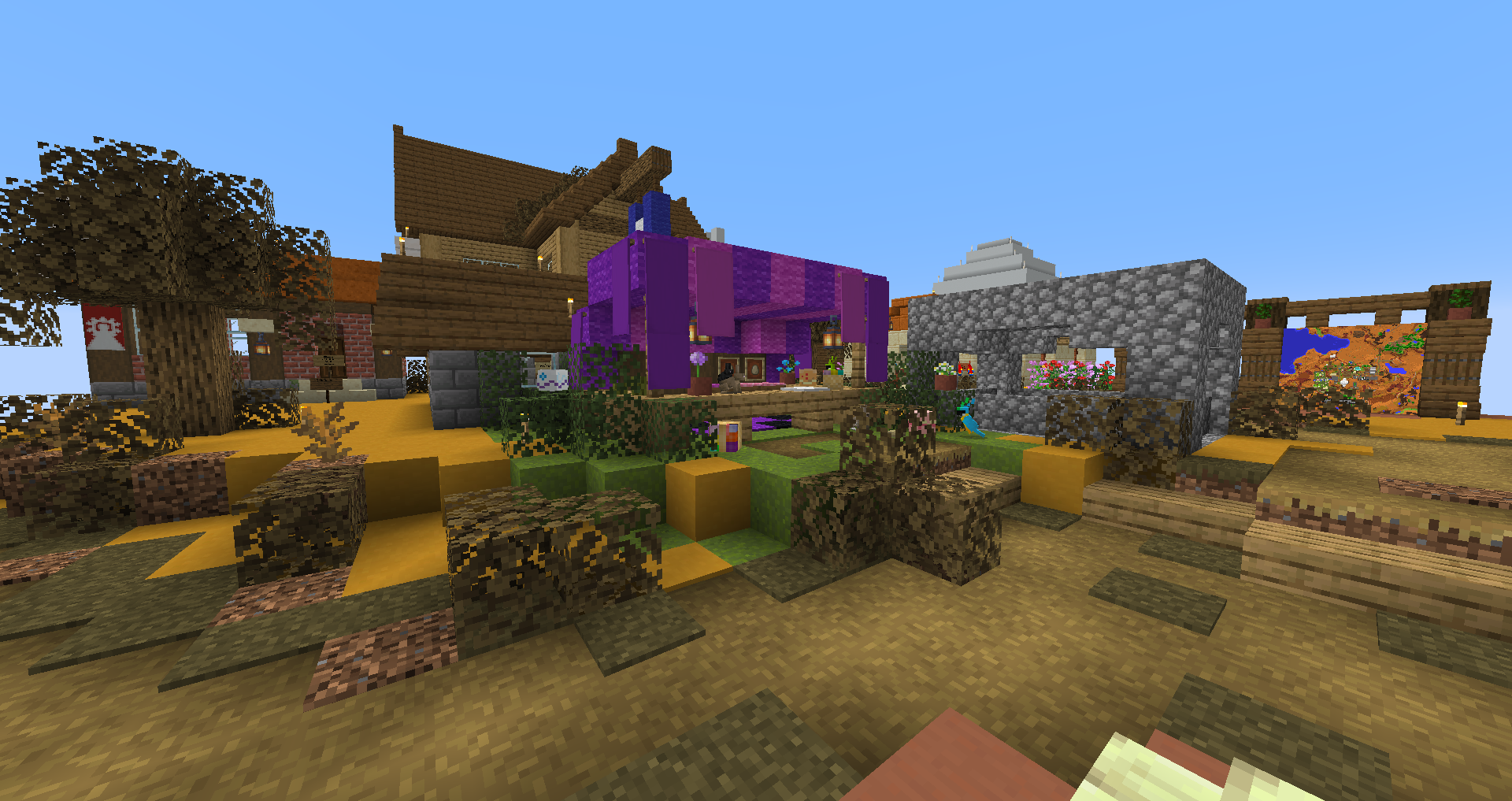 The egg hunt will send you all over the map to find eggs (player heads). Some are in plain sight, some are a little more hidden. Every egg is hidden at a location with a marker in case you're having trouble with any of the clues. At the end of the hunt you'll receive some nifty unique prizes!

Fair warning: in case you're doing this hunt with a group of people, make sure you receive all the clues in your chat yourself. The way the hunt is set up, you need to find the eggs in order so you can't just cheese the hunt if someone tells you where the final egg is. If you don't get the clue in chat, the flag also didn't get set for you, and you won't be able to get the next clue, so be mindful of that!
12

Claim your land / Re: Im back baby

April 10, 2020, 08:44:44 am
Terribly sorry for ignoring this for so long. I've been going around the server putting markers on unclaimed bases and realized this marker was never added. I was sort of inactive during the time this topic was posted because of family reasons and it seems none of the other mods got around to it. Added now, please forgive us :c
13

Claim your land / Re: I said don?t tap the glass!

April 10, 2020, 08:43:13 am
Terribly sorry for ignoring this for so long. I've been going around the server putting markers on unclaimed bases and realized this marker was never added. I was sort of inactive during the time this topic was posted because of family reasons and it seems none of the other mods got around to it. Added now, please forgive us :c
14

Claim your land / Re: My Tower

April 10, 2020, 08:42:48 am
Terribly sorry for ignoring this for so long. I've been going around the server putting markers on unclaimed bases and realized this marker was never added. I was sort of inactive during the time this topic was posted because of family reasons and it seems none of the other mods got around to it. Added now, please forgive us :c
15